Popular
RBI launches retail digital rupee: what does it mean for you
Challenges in succession planning for business families
The good and the vague of the Digital Personal Data Protection Bill 2022
Rising importance of Indian middle class and its impact on Indian economy
SEBI regulations on Finfluencers – is this the end of the road for them?
Mutual Funds v/s PMS: Which Is The Best Way To Invest Money?
Bali G20 summit: success or another failed opportunity?
Why does India need a new capital tax regime?
Is cash still King in India?
Why startups are preferring temporary workers?
Home » Weekly Wrap Up » Rupee in ICU🏥
Weekly Wrap Up

Indian rupee has been battered and bruised this year, tanking to reach fresh lows of 82.22 against the US Dollar this week. The factors that contributed the most to Rupee’s downfall were the rise in crude oil prices and the aggressive rate hikes by the US Federal Reserve in order to bring down inflation to 2%.

Despite RBI’s continued intervention of selling $$ reserves, the local currency has depreciated close to 9% in the last 1 year. After RBI’s recent monetary policy committee meeting outcome, the rupee found some short-term respite, however, it couldn’t hold those gains due to the widening trade deficit data that was published. Trade deficit increases due to a slowdown of exports and due to a rise in imports, predominantly the surge in crude oil prices (as Crude Oil forms a significant chunk of India’s import basket). 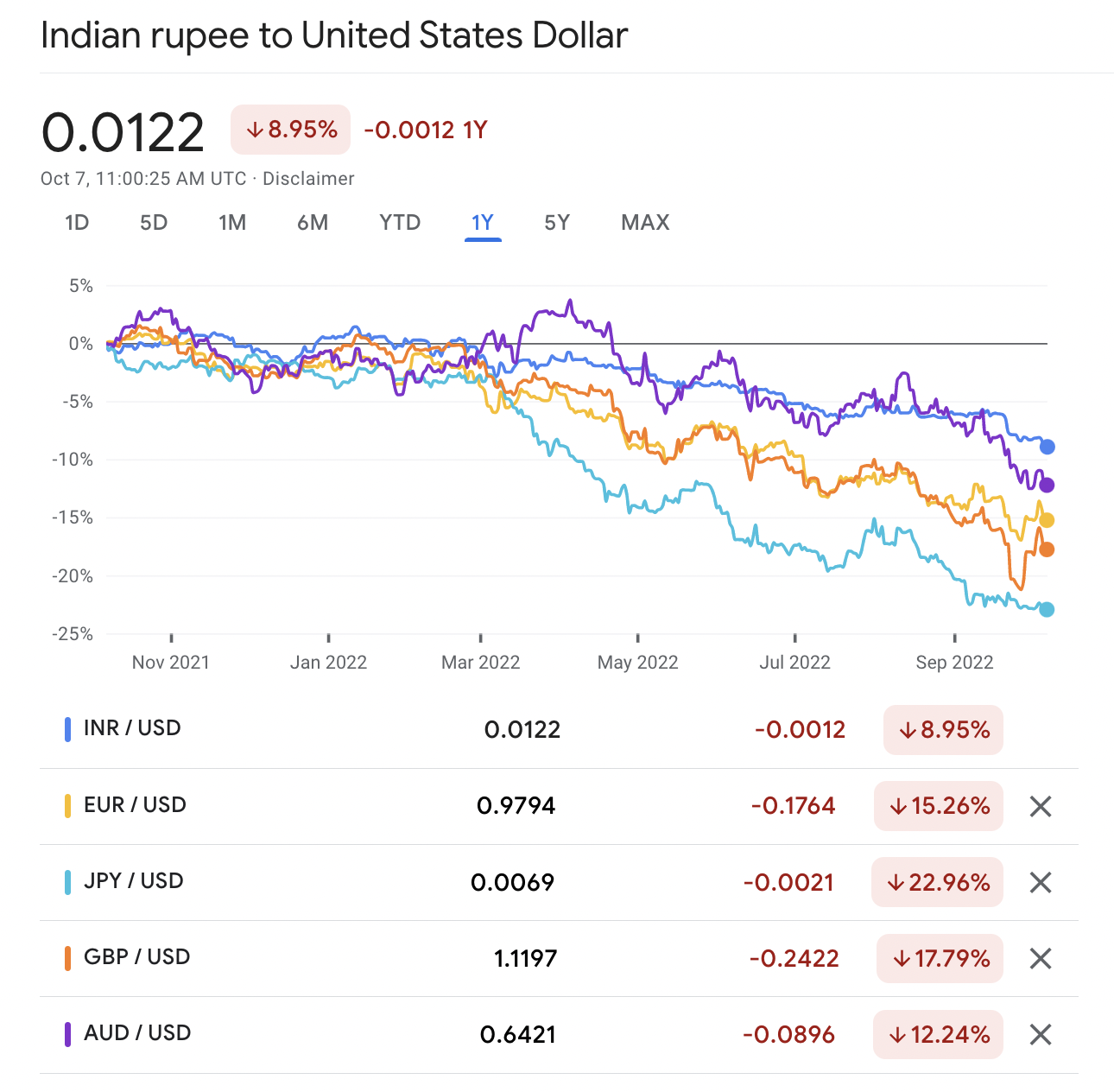 Some solace: Despite negative global cues, rising crude oil prices, and rate hikes by the US Federal Reserve, the Indian Rupee is the least depreciated currency compared to other major currencies mentioned in the above infographic.

All is well: While the Indian rupee has depreciated this year, the factors that have led to this downfall are more of an external nature than internal as India continues to perform well ahead of its peers on the macro front.

Is the Credit Suisse debacle unfolding of another 2008 financial crisis is a question that’s making the rounds. Credit Suisse (CS) – the 166-year-old global bank’s share price this year has tanked by 57% so far!

What’s happening? CS bond prices have fallen steeply because fewer people want to lend money to it. This has resulted in higher Credit Default Swap (CDS) spreads –  a type of insurance investors take out against a company when they believe it will default. Higher the risk, more expensive is the price and that’s why the rates on CS have touched 14-year highs. All this despite being sufficiently capitalized by regulatory measures.

What led CS to this state? Plethora of risky investments, to put it simply. It had convinced investors to put in almost $15.5 bn in 2 firms that operated on a leverage model. No sooner, these companies declared bankruptcy, putting a dent on CS and its investors.

Can it be the next Lehman? Banking sector seldom operates in a vacuum. Cross-holding and lending to each other makes them all interconnected. Hence what may seem like an isolated case, may not really be. Deutsche Bank and UBS have also seen their CDS rising. FYI, $600 Billion is what Lehman Brothers held in assets when they crashed. $2800 Billion is what CS, and Deutsche Bank control in AUM.

The current reaction may be a bit exaggerated. But its time to get the house in order. A restructuring plan or selling off complete divisions could be some options on the table. CS has sufficient assets to bail itself out and prevent a repeat of 2008. That’s the last thing the world needs!.

Band, Baajaa and Baaraat is back 🥁

After mass cancellations and losses to the tune of Rs. 200 crores borne by the hospitality industry due to pandemic, Indian couples are queuing up at the mandap. With pandemics pretty much behind us, Indians are getting prepared to celebrate their weddings bigger than ever!

Achhe Din. Despite no auspicious dates in October, hotels are expecting be to be fully booked and surpass demand of pre-covid levels. In fact, the Fairmont Hotel in Jaipur is enjoying the wedding season as its rates are already up by 35% from pre-covid levels and is already booked out from October till February next year.

Everyone wants a bite of it! The Indian Wedding industry is big money, worth almost $50 billion. And everyone wants to have a share in it. As many couples are choosing to have a destination wedding, tourism boards and hotels across South East Asia are going all out to attract the wealthy Indian families to make up for their deficits. For Thailand, wedding revenue is even embedded in their tourism budget and expects $18 million this year from luxury weddings.

Well, this wedding season is indeed a shagun for the industry to make up for their previous losses. Bring out all the Band, Baaja and Baarat!

Not that travelholic need any more incentive but Air India has good news for you! Air India has rolled out a new in-flight menu on its domestic routes as part of its plan to become the Maharaja of the air once again.

What’s new? The new menu features a healthy and tasty variety of gourmet entrees, appetizers, and drool-worthy desserts from India and all around the world to satisfy the passenger’s palette. To provide a glimpse of the menu, passengers can expect buttery croissants, creamy omelettes, piping hot aloo parathas, Chicken 65, sugar-free chocolates and an assortment of pastries. Recently, the airline even devised a wholesome Navratri menu specially for those who fast during the festival.

P.s. Our sincerest apologies if this made your mouth water!

The Tata effect: Since its homecoming back to the Tata Group, the airline is in full swing of expanding its network and fleet, revamping customer experience and improving brand loyalty. Gone are the days when Indigo took steps to weigh less and keep costs low. Airlines today are going all out to win customers. Afterall competition from newer players like Akasa and Jet 2.0 makes Tata’s task even tougher. Will it pay off?

What happened? Prosus, the owner of PayU has terminated the $4.7 billion deal to acquire India’s leading payments aggregator BillDesk. The all-cash transaction was announced at the peak of last year’s bull run and was expected to be the second-largest M&A deal in South Asian markets in the consumer internet space after Walmart’s acquisition of Flipkart.

Deal overpriced: The sudden move was triggered by the steep fall in valuation of major US payments firms that put the pricing of the deal under pressure. Moreover, in an uncertain market like this, an all-cash deal wouldn’t have been received well by shareholders. The merger would have created the largest payments business in the country by a distance.

Conditions not met. The success of the transaction was subject to fulfillment of certain conditions. This included approval from the Competition Commission of India – the watchdog of anti-competitive practices in the market. This approval took almost a year which caused further uncertainty. However, it failed to satisfy the certain other conditions by September 30, 2022 – causing the agreement to be terminated automatically.

What else made news?

🕊️ ‘Wind Man’ passes away: Tulsi Tanti, a pioneer of wind energy and founder of Suzlon Energy passes away at 64.

🤝 Merger gets CCI Nod: The proposed merger between Zee Entertainment and Sony receives approval from the Competition Commission of India.

🐦 Musk revives bid: Following Twitter’s lawsuit, Musk offers to go through with his original proposal to buy the social media company for $44 billion.

⛔ Offer revoked: IT firms like Wipro, Infosys and Tech Mahindra have revoked offer letters given to students after delaying their joining by nearly 3-4 months.

💻Laptop at 15k: Reliance Jio is expanding into the affordable laptop segment which is expected to rollout by January 2023 at a retail price of just Rs. 15,000.

🛕Why India counts on these शुभ दिन?

Namma Bengaluru on its knees