Popular
Union Budget 2023: Hits & Misses
Budget 2023 – Income tax, expectations and more
Adani Enterprises FPO: Should you subscribe or skip?
SEBI report on F&O traders: Not worth the hype
Accounting irregularities: How can investors spot red flags? 
Production Linked Incentive (PLI) : Can India be the factory of the world?
Davos 2023 – India, the shining star
Target Maturity Funds: Best alternative to FDs in rising interest rate scenario
Union Budget 2023-24: Wishlist of a common Indian
What to do with IT stocks post Q3 results?
Home » Weekly Wrap Up » Will Ukraine win the war? ⚔️
Weekly Wrap Up

Ukraine’s stunning comeback: This week, Ukraine recaptured vital areas which were held hostage by Russia. The swiftly executed military operation is undoubtedly a major victory for Volodymyr Zelensky’s government and proves to be a turning point in its mission to drive out Russian forces out of the country.

A pivotal moment: Ukraine has quickly recaptured 6,000 sq. km. in the east and south of the country and it continues to receive support from the West. US has been sending billions of dollars in the form of military aid and assistance. Thanks to the abandonment of Russian forces from their headquarters in Izium, they also left behind large stores of equipment and ammunition that the Ukrainians can now use against them!

How will Mr. Putin react to these advancements? Putin is currently in an unfavourable position, both domestically and internationally. The situation at home has become grim with many Putin loyalists now calling for his resignation. However, one can never gauge the depths to which a humiliated Putin might go and may even push the war into a dangerous new phase.

Now coming to the million $$ question – Will Ukraine emerge victorious? The war has entered a new stage. The continued support from West could help Ukraine exploit weaknesses in Russian lines and takeover more land. BUT, given how important this war is to Putin, a fear lurking in everyone’s heart is, will Putin cross the line to save his face?

Byju’s: Biting more than it can chew 💻

Pandemic era gold losing its sheen: Following the ed-tech boom during covid, this sector is gradually losing its mojo. Byju’s the poster boy of Indian Edtech industry reported its FY21 results this week, a delay of more than a year! Losses came at a whooping Rs. 4588 cr, translating to Rs. 12.5cr every day!

Layoffs have naturally been an easy resort to cut costs and this deteriorating situation is not limited to Byju. Whitehat Jr., Vedantu, Unacademy also had to let go of its employees. Additionally, a clutch of start-ups including Lido, Udayy and SuperLearn have shut their operations. That’s not all! As reported by The Ken, Unacademy is banking on teachers to sell courses across its you tube channels with salaries tied to no. of views!

So what really is ailing the edtech space? The cash burn rate is just too high. Most ed-tech companies spend huge sums on hiring, advertising and acquisitions. With schools now fully functional, ed-tech giants are now pivoting to a hybrid model further pushing up costs.

Big and Bold: Stagnating revenues and mounting losses has cornered Mr. Byju’s with allegations. VC firms Sumeru and Oxshott have refused to give him the $300 million they promised. But does he really care? Surprisingly no! In a bold interview, Byju’s came out open saying that “Byju’s is a PROFITABLE company that is bleeding money because it is acquiring fast-growing companies that need growth capital. If investors do not give money, it’s their loss!” Could he care less!

But not everything is lost: Despite difficulties, some ed-techs such as PhysicsWallah, a bootstrapped business, has managed to achieve unicorn status at the Series A stage. Good time for companies to take a step back, prioritize their goals and get more realistic with their projections.

First, what is moonlighting? It is the practice of taking a second job after regular working hours, mostly without the consent of the employer.

Mixed views on moonlighting – This week, Indian IT giants have been sharing their views back and forth on the morality of moonlighting. Wipro Chairman, Rishad Premji called it “cheating” while Infosys said in an email that it could lead to the termination of employment. Contrastingly, Infosys director, Mohandas Pai said that employees must have the freedom to do what they want post working hours. In fact, Swiggy even launched an industry-first ‘Moonlighting policy’ for its employees last month.

What does the law say? In India, dual employment is prohibited for factory workers and is restricted by state-governed laws for employees of some shops and commercial establishments. Employees in the IT sector are not bound by any laws restricting side hustles. However, they might be bound by their employment contracts with regards to single employment, non-compete clauses and maintaining confidentiality. In such cases, taking up a second job may be considered a violation.

But side hustles are not anything new – Startups including Flipkart, Zomato, Ola have been formed as the founders were moonlighting; many consultants did side hustles before they went fully independent; teachers moonlight by giving tuitions.

Bottomline: Time to wipe off dusts from your contract and read between the lines!

What happened: India is all set to get its first semiconductor production plant. Vedanta and Taiwanese electronics giant Foxconn entered into a 60:40 joint venture where the two companies will invest ₹ 1.54 lakh crore in setting up a chip-making facility in Ahmedabad. The plants are expected to start production in two years, as per Vedanta’s Mr. Agarwal.
Govt has thrown lavish incentives to boost high-tech projects and the states are competing with one another to grab projects.

Confusion: Following the announcement, share prices of Vedanta rose by 15%. However, the rise was short-lived. Vedanta later made a clarification that the proposed business of manufacturing semiconductors would be undertaken by its ultimate holding company, Volcan Investments, and not Vedanta itself. As a result, shares tumbled down by almost 9%.

Bottomline: Regardless of the confusion, this JV can provide a big boost to the semiconductor market in India which was valued at almost $28 billion in 2021. Changing geopolitics has forced several countries to become self-reliant in key products like chips, which is practically used everywhere from smartphones, speakers to rockets. US too recently passed the Chips & Science Act to boost local chip making. 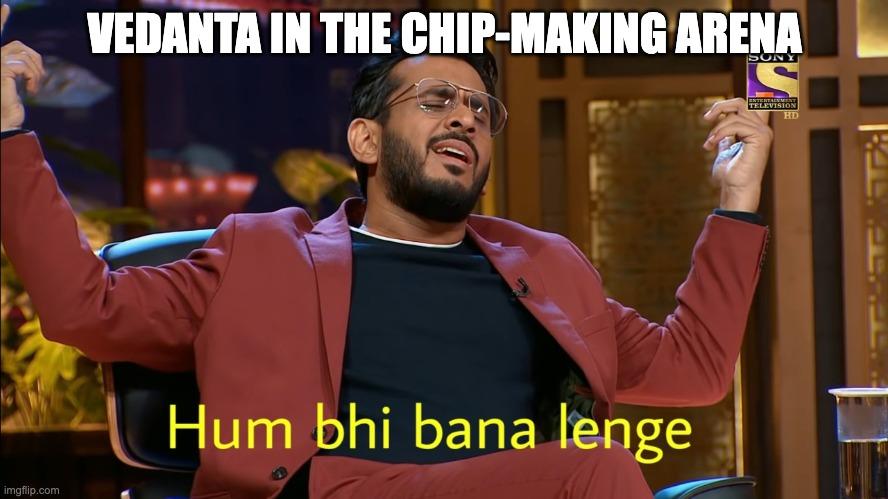 What happened: Tata Consumer is in eyeing a stake in India’s largest packaged water brand, Bisleri. This news came months after news reports cited company looking to acquire up to five brands.

Details: Several other players like Nestle, Danone, and Reliance Retail had eyed the packaged drinking water player, but nothing materialised. Bisleri afterall is a mammoth with 32% market share and unparalleled distribution network. It is almost synonymous to bottled water in India!

Cementing position: Financial details are awaited, but if this deal goes through it will place Tata in a strong position in this space along with its owned labels Tata Water Plus, Tata Copper+, and Himalayan Water.

What else made news?

✈️Fresh start: Air India announced Vihaan.ai, a 5 year roadmap to to increase its market share to 30%

⚰️An expensive funeral: The funeral of Queen Elizabeth II is expected to be a costly affair of over £14 million.

📈 Rate hike fears: US CPI went up to 8.3% in August, signalling another 75 bps rate hike pulling US markets down

📚 Reading : Fooled by Randomness by Nassim Nicholas Taleb. The book tends to shatter the illusions of people by teaching them how to recognize randomness. The biggest takeaway is that the world doesnt always work the way it has done in the past.

🎧 Listening : Planet Money: An American podcast which gives insights into all that is happening in business and economy in a creative and entertaining way.

Shareholders of Adani stocks will relate!

A Quality Small-Cap Mining Stock To Watch Out For: Do You Own It?

Hope you have a happy weekend!

Disclaimer: This write-up is solely for educational purposes. This in no way should be construed as a buy/sell recommendation. Please consult your investment advisor before investing.

Have feedback? Let us know at support@tavaga.com or speak to us:

Why are young Indians severely unprepared for retirement?

SEBI report on F&O traders: Not worth the...