EPF is the default retirement fund for most of India’s salaried population. A handy calculator and EPF’s nuances can stand us in good stead

The Oxford dictionary defines ‘provident’ as the “making or indicative of timely preparation for the future”. Provident, then, can be an apt word for most of our investing. Preparing for the future, with all the attendant complications of inflation, unforeseen disruptions to earnings, wealth loss or erosion, and sudden expenses.

But the best application of the word is to indicate social security and pension/retirement funds. India, too, has its share of provident funds. Between November, 1951 and 1952, the Employees' Provident Funds Bill got shaped up by our legislature and the Employees Provident Fund Organisation of India (EPFO) came into being (please see box for details). 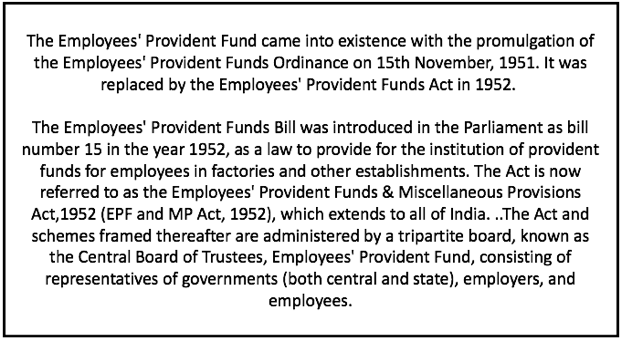 
EPF - One Of The Best Ways To Regularly Save


What makes the Employees’ Provident Fund (EPF) so crucial to Indian employees? EPF is a veritable tool for social security. The contributions we, along with our employers, make to the fund are reinvested in a host of investment instruments, while promising us a premandated rate of return. While the rate of return is not an aggressive one, the EPF acts as a way of instilling savings discipline. It wicks away from our earnings regularly, creating a corpus for the future, in the background, while letting us go on with our lives.

The interest earned, calculated on the basis of monthly running balance, is also tax-free (details below). The EPF account has the exempt-exempt-exempt (EEE) status, which means the principal invested, the interest earned and the maturity payout are all exempted from income tax.

The current rate of EPF is 8.65 percent, which can give many a debt investment instrument a run for its money. The money in the EPF accounts are sovereign-guaranteed.


EPF Nuances
The foremost rule of EPF is the contribution made by an employee will have to be matched by the employer. To be a contributing member, we have got to be employed and receive a salary. The employer has to be one covered under the provisions of the EPF and MP Act, 1952.

An organisation with more than 20 employees has to mandatorily sign up for EPF. Employees there earning upto Rs 15,000 a month are bound by the law to contribute to the EPF, along with the employer, of course. Organisations with less than 20 people, the contribution is fixed at 10 percent for both employee and employer.

Anyone drawing more than Rs 15,000 a month can volunteer to become a contributor (please see details below), again matched by the employer, if approved by the EPFO.


Voluntary Signing Up
Those of us who start work at a monthly pay above Rs 15,000, can volunteer to be part of the EPF, if not a member already. Using the option of Para-26 (6) of the PF Scheme, the employee can become a member within six months of joining, should the employer also agree.


Employee And Employer Contribution
The EPF and MP Act, 1952, stipulates 12 percent of the basic salary (plus allowances like dearness allowance, food allowance, special allowance, retaining allowance) of an eligible employee as contribution to the EPFO, matched equally by the employer (employing over 20 people, else it is 10 percent for both). At 12 percent, it translates to 24 percent of one’s cost-to-company (CTC) as mentioned these days.

Out of the amount submitted by the employer, 8.33 percent (calculated on the sum of Rs 15,000, irrespective of the member's current salary) goes to the Employees’ Pension Scheme.

Most eligible companies, nowadays, show the employer’s contribution as part of the CTC when discussing salary with the employee. It is not part of the gross salary of the employee, but is thought to be a part of her CTC as the employer is bound by law to provide its share.

Gross salary is defined as the take-home salary plus the employee’s own contribution to EPF. CTC, on the other hand, contains the gross salary, along with the employer’s share of EPF, gratuity contribution etc. The net salary includes the basic pay, allowances such as special, conveyance, food, house rent and telephone.

However, under no circumstance can the employer deduct its share from our basic wages/salary (different from CTC). If the employer share is deducted from our gross or net salary, then it is a punishable offence and the EPFO will take action on such complaints.

Details of a year’s contributions are shared by the EPFO, forwarded later by the employer. These contain the contribution amounts for the year, and the interest earned and is called the PF statement.

There is also a provision to choose a share higher than the statutory 12 percent, but which won't be matched by the employer. The additional contribution goes into Voluntary Provident Fund (VPF), using the existing universal account number. The interest, the rate being the same as EPF, is also tax-free. We would need to request our HR or payroll department to initiate it through a form.


Refer to our calculator to know more about how EPF contributions shape up our future retirement kitties.

EPF Withdrawal
On retiring, having reached at least 55 years of age, or two months after leaving a job, we can get the accumulated amount including our and our employers’ contributions, and the interest on the sum.

However, if we move from one job to another, it is best to roll over our EPF, rather than withdraw as it will be viewed as a continuous membership. EPF withdrawals invite tax if we do so before completing five years of service.

Should we take the self-employment route, then we will be left with no choice but to withdraw our entire EPF money as we cannot continue holding an account if not employed.

If we are to withdraw our EPF sum, then we may withdraw upto 75 percent after a month of quitting a job and the remaining after two months of being unemployed.

The EPFO also lets us take an advance on our account, which is not a loan, ie. without the burden of repayment (details below).

EPF Advances
A subscriber can withdraw upto 90 percent of the EPF balance (including the interest accrued), while still in employment, within one year before retirement or after completing 54 years of age, whichever is later.

The EPFO also lets its subscribers take advances for reasons ranging from medical needs, marriage in the immediate family, expenditure on education, purchase or construction of a house. The terms and conditions vary with the subscriber’s service tenure and criteria.


EPF’s UAN
The universal account number (UAN) has made the members’ lives easier. No longer do we have to bother about being assigned different PF numbers when switching jobs.

Those with a UAN, need only to furnish the number on a designated declaration form to continue with our EPF memberships and accounts when joining a new place. Earlier, such a move entailed transferring the older PF balance to the new one.

UAN has facilitated withdrawals too. The task can be done with a simple form, bypassing the employer’s involvement, provided we have our active bank accounts linked to the UAN.


How Does The EPFO Make Money
The EPF’s rate of interest is higher than most savings bank offers and can be seen as at par with debt instruments. The chart shows how the rate has moved over the years. 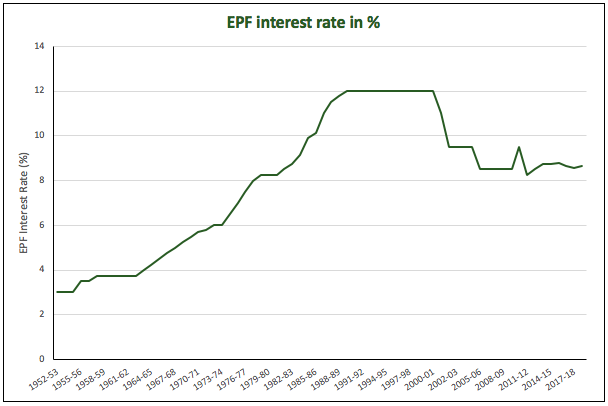 The EPFO invests a sizeable amount of the kitty in ETFs, as much as upto 15 percent. The value of the investments so far is estimated to be about Rs 55,000 crore. The rest of the investible deposits are invested in debt instruments, government bonds, money market products and infrastructure trusts, which are more sedate in their returns than equities.

The account holders i.e we, don't get to see the breakup and neither do we get a say in the ratio of equities vs other instruments that our retirement fund is put to work in.

There have been reports of the EPFO working towards providing us with this breakup, allowing us to see the cash and ETF parts and even choose to tweak the shares based on our risk appetite. It might even see the Labour Ministry to remove the caps (such as 15 percent in ETFs) on investment in different asset classes, to let us choose freely, according to news reports.

EPF Taxation
If we withdraw our EPF sum before completing five years in continuous service, the amount gets taxed in the financial year of the withdrawal.

The interest accrued on our EPF contributions can also be split in two -- on the employer's share and on our share.

If our withdrawal attracts tax, then the employer’s contribution and the interest earned on it will be taxed as part of our salary in our income tax return.

Our share is not taxable. However, if we had claimed tax deductions under 80C of the Income Tax Act on our share in the preceding years, then the discounted amount added to and taxed under salary in the withdrawal year.

The interest on our portion is taxed as ‘income from other sources’.

A tax deducted at source (TDS) of 10 percent is levied on withdrawals before five years of continuous service, except for cases where the amount to be taxed is less than Rs 50,000 or if the employer is shutting shop.


EPF - One Of The Largest Of Its Kind
As a social security organisation in India, the sheer volume of transactions and clients have made it one of the largest in the world. By the end of 2018 calendar year, there were 221.8 million accounts (under both exempt and nonexempt categories). In the financial year of 2018-19 (ending March, 2019), 11.52 million EPF claims were settled.

Backed by sovereign guarantee, regular submissions, tax exemptions and the promise of a financial umbrella when we retire -- these make the EPF route a no-brainer to many of the salaried. But even though it is a social security scheme, by itself it will fall short of meeting our future needs if we don't wisely invest.

Savvy asset diversification and an honest assessment of our risk-taking abilities will complement the goal of an EPF account further -- make our retirement umbrella sturdier.